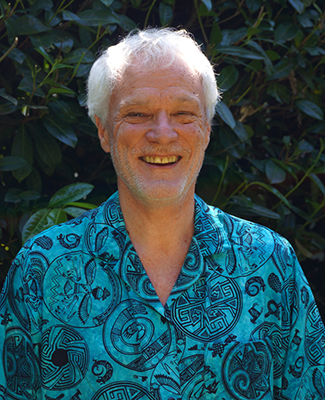 I have been a practicing therapist for over 40 years. I studied Process Work directly with Arnold Mindell – the original creator of Process Oriented Psychology – and others since the eighties, and have been on the faculty of the Process Work Institute in Portland since 1992. I have taught extensively both in the U.S. and worldwide, including in the UK, Scotland, Ireland, Poland, the Netherlands and Denmark, facilitating seminars in the fields of relationships, sexuality, dreams, bodywork, addictions, and conflict facilitation. In addition, I was part of a team of conflict facilitators working with social issues and world conflicts in large groups in Australia, Slovakia, India and Greece.

During the 90s, I joined several Process Work teachers in helping set up a Process Work Training Program in Ireland. I facilitated a range of diversity seminars on topics such as Sexism, Racism, Homophobia and what the Irish refer to as, The Troubles. Together with others, I also facilitated open forums in Portland on Gay Rights and 911. During this same period, I taught at several spiritual communities, addressing issues of power dynamics, money, and sex. In addition, I facilitated groups of priests and nuns in raising their awareness around diversity within their community. One of the main focuses ended up being around sex and intimacy and the vows of celibacy, all before the widespread abuse scandals broke.

I worked at a privately funded Family Service Agency in Seattle for over 15 years, where I provided individual, couple, and family counseling, especially for people who couldn’t afford private practice fees. I received extensive training in a variety of approaches, including an in-depth training in Gestalt Therapy, as well as completing a 4-year training in Bioenergetics and Reichian Bodywork.

As an adjunct faculty member at Antioch University in Seattle, I taught in the Masters of Psychology Program, teaching courses on Advanced Gestalt, Psychodiagnostics, and Counseling Skills. In addition, I taught Counseling Techniques at the National College for Naturopathic Medicine in Portland.

I am deeply inspired by the Native American, Taoist, Tantric, Sufi/Rumi, Zen, Tibetan Buddhist, and Western Mystical traditions. I hold the beauty and wisdom of indigenous and spiritual healing practices in wonder and awe, and it’s important to me to co-create an approach, which honors the many rich contributions of these traditions without exploiting or marginalizing them.

I am passionate about developing my artwork while integrating spiritual and shamanic traditions with my interest in alternative relationship styles and sexual practices.

What does it mean to be become a ‘vessel for the Great Spirit’ in the Creative Process?

Click here to read the ‘Hollow Bone‘: an interview with Robert on his unique process of creating his works of art and the “vision of the Agate’s eyes”.

Please note that our credentials are Masters (Niyati) and MSW and Diplomate in Process Oriented Psychology (Robert) and that we are not licensed counselors and we do not diagnose and treat mental disorders. If you are in need of a licensed mental health professional, we’d be happy to refer you to a licensed counselor.